We are equipment shop , but even make the parts to achieve if there are not good ones.

Among the batteries that are widely used, rechargeable batteries, which are called secondary batteries, such as lithium-ion and nickel hydride and so on are necessary for important industries. Hybrid cars, cell-phones and Personal Computers for example. Normally, batteries are filled with fluid by the name of electrolyte.
So we must fill electrolyte somewhere in the process without a drop of leakage and in the right quantity even in very small amounts.
Nagano Automation has been handling such technology to precisely control liquids in different fields from ink injection for printers and liquid crystal injection in the early stages. On this basis, we attempt to apply these technologies for manufacturing equipment of secondary batteries and other uses. We can handle manufacturing equipment for every field and therefore we can establish our original technology with a breadth of vision. Here we will demonstrate our company's benefits, thinking back to the development of electrolyte and liquid crystal injection pumps, with a discussion among our development personnel.

Please tell us about the first liquid injection pump. 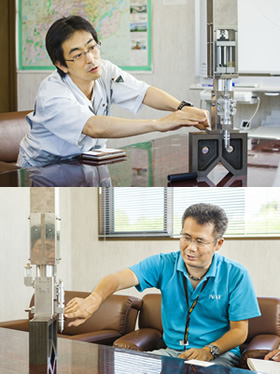 Mr. Yonezawa Draws liquid into a tube from an inlet like water pistol and discharges liquid to the other part from outlet. In general, this system goes by the name of plunger pump or plunger dispenser.

Mr. Hirai This system has been produced by many manufacturers. The most difficult part, however, was to select a manufacturer when beginning the handling of liquid crystal injection pumps which was the basis of the electrolytic injection pump. Mr. Yonezawa tried to contact dispenser makers across the country one after another but there were only two makers who met our customer's demands at the time.

Mr. Yonezawa Since this was for liquid crystals we wanted to make pure plastic pumps which would only touch metallic particles as little as possible. Further, we wanted to inject liquid in a vacuum to control volume but all of the manufacturers said that they were unable to measure up to our expectations using plastic. Until then, there were no manufacturers who made plastic plunger pumps anywhere. In addition, some problems were occurring, for example, it was unable to control volume and difficult to get accuracy.

Mr. Hirai So we advanced development in cooperation with the two manufacturers. The price of liquid crystal is expensive, as high as gold. But before that time, we adopted a method to dip strips of glass in a liquid crystal filled container. This was a wasteful method, because the liquid crystal cannot be reused. However, the latest version of the dispenser features less injection without waste because there is almost no liquid drip in a vacuum. We determined the optimal angle to get the smallest injection.

Were there any other difficulties in development?

Mr. Hirai Actually, one week before delivery, it came to light that small particles got into the liquid crystal just before production was about to begin. There were microscopic burrs in the plastic.

Mr. Yonezawa We flew to a manufacturer in Fukuoka who has the technology to view the burrs under a microscope. Of course, it was insolvable in a week and took 3 months to be solved in the end.

Mr. Hirai We tried 5 or 6 possible solutions, but we could not prevent particles being mixed into the liquid. At last, we attempted to embed a generic O-ring in the space where Teflon packing was embedded, though we did not expect anything. The O-ring has rough burr but such a burr did not get into the liquid because it was probably too rough. As a result, no particles were leached into the liquid. We thought, why didn't we just use an O-ring in the first place. We were happy to find the solution, but at the same time we were disappointed and wondered "was it the best way?"

Mr. Yonezawa We worried about air. If we used a round O-ring, the air present in the packing materials may remain and get into the liquid therefore we did not use O-ring at first. To wipe out such worries, we processed packing materials to have the proper shape not to trap air and adhere to the O-ring on our own accord.

Mr. Hirai Other manufacturers would probably wonder why we took such extraordinary measures, that it was a truly complicated task. But due to the difficulties we encountered, we are proud to have the capability to deliver plastic dispensers without foreign particles. 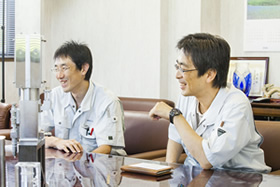 Mr. Hirai At first, we intended to ask a special manufacturer. But when we discovered we had problem with particles, all of the dispenser manufacturers gave up trying to make the pump. So we decided that we should carry on and develop our own. We should not give up because we received an order from our customer and we had a responsibility to build it ourselves. To develop the liquid crystal injection pump, it took 6 months. But finally, the problem of particles was solved and the customer was satisfied saying "beautiful." It was Christmas Eve and two of us had a toast at a sushi restaurant. It was 2004, just 8 years ago.

Our prior research was the basis of the electrolytic injection pump
which eliminates metallic particle contamination. 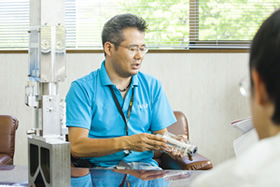 Mr. Sakashita We received an order from the manufacturer of stationary large cells. So we decided to apply our vacuum based injection technology from the skills we cultivated in liquid crystals.

Mr. Hirai Riginally, there was a foreign manufacturer who held a monopoly on the electrolytic injection pump market world wide. We also used this manufacturer in our machine production. However, about five years ago the large laminate types of batteries, which have different shapes from the traditional type, became widely used for the purpose of energy storage for automobiles and home use. or this reason, it became impossible to continue using that maker's pumps. With traditional batteries, a vacuum could be created in the batteries to make it easy to dip and inject electrolyte. However, in the case of large laminate type batteries, the entire environment requires a vacuum in which the electrolyte is injected. Existing commercial pumps of the day were unsuitable for this application. So we decided, on our own accord, to develop a pump for injecting electrolytic in a vacuum environment. The pump in the foreign manufacturer's pump was of the horizontal type. But in my attempts at different layouts, I reckoned that the vertical type may be a better solution. After discussing the situation with line workers, we made an attempt to make the vertical type design. It was the first prototype dispenser. Some parts were made using our experience with liquid crystals and the pump and valves to extract liquid were made with newly developed technologies. When we fixed the valves, we tried various types to increase the suction rate. We are still in close contact with the valve manufacturer who supported us at that time.

How was the company able to bring about
this ability to develop such new technology? 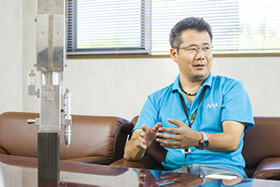 Mr. Hirai Because we do not rely on other people. We have been going thru the difficulties to develop new technologies and these experiences have built up to our current ability.

Mr. Sakashita It is our strong suit that when a client places an order, we will carry out the order no matter the obstacles.

Mr. Hirai We have significant experience in the past developing new technologies. We can easily harness this experience when the need to develop new technologies arises. This new pump technology is the culmination of our wide array of experiences. If we only built the dispenser, I suppose that this equipment would not have been developed.

Please tell us your development plans for the future. 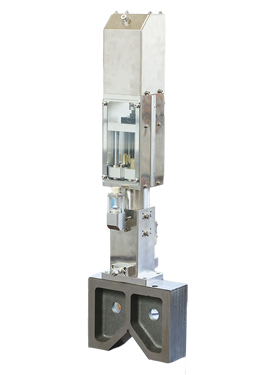 Mr. Yonezawa There are various processes to make batteries. Among them, processes such as electrolytic injection and lamination to achieve high voltage by stacking cells are a cause of trouble for customers. We have been working with injection technologies for many years, therefore we want to expand our repertories of lamination in the future. Even if advances are made in batteries and electrolyte is not used in the future for batteries, the lamination process is always required.

Mr. Hirai I am now setting out to develop a laminating machine, following a customer request, with double the performance at a third of the size. The machine is near completion and includes 3 patterns single wafer, winding and bag. I am working hard to get all patterns as early as possible.

We are often asked how we are able to stay at the cutting edge of the industry. 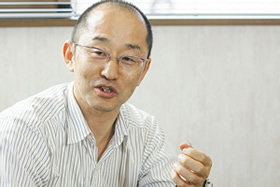 Mr. Sakashita I think it's because our engineering and production departments are willing to do anything (laughing). The sales department regularly receives orders from the busiest and fastest growing companies of the day. Manufacturing equipment is not needed for usual tasks, it is needed when making new items or starting in a new field. If a request is passed up on, that's it. It's final. We trust in the efforts of our company and the company responds to the customer's request received by the sales department without fail.

I understand. The relationship between the sales and production sides strengthens your capabilities. Thank you very much.